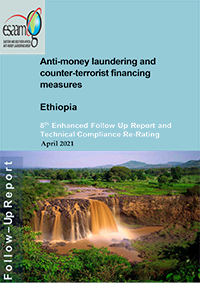 Overall, Ethiopia has made sufficient progress in addressing deficiencies in technical compliance identified in its MER to justify a re-rating.

Recommendation 15, which was originally rated Largely Compliant in its 2015 Mutual Evalutation has been downgraded from LC to Partially Compliant.

Ethiopia will remain in enhanced follow-up and will continue to inform the ESAAMLG of the progress made in improving the implementation of its AML/CFT measures two months before each Task Force meeting.