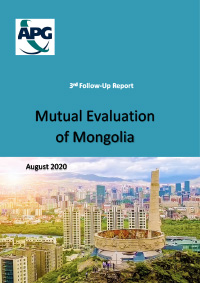 Since its 2017 Mutual Evaluation and ensuing 2019 Follow-Up Report, Mongolia has made significant progress towards overcoming deficiencies on technical compliance under R14, R.28 and R.35.

On Recommendation15, which was amended after the MER and FUR were adopted, Mongolia does not meet the updated FATF standards on VA and VASPshas been re-rated from Largely Compliant to Partially Compliant.

Mongolia remains in enhanced follow-up and will continue to report back to APG on progress to strengthen its implementation of AML/CFT measures.