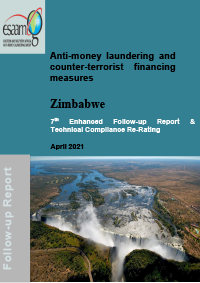 Zimbabwe has made progress in addressing some of the technical compliance deficiencies identified in its MER.

On Recommendations that are being re rated due to the changes made to the FATF Standards:

Zimbabwe will remain in enhanced follow-up and will continue to inform ESAAMLG of the progress made in improving and implementing its AML/CFT measures.