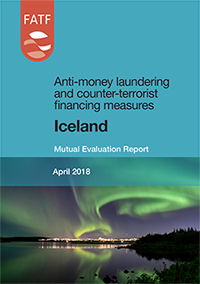 Between 2008 and 2015, Iceland demonstrated a high level of cooperation and coordination as they focused almost exclusively on the financial crimes and complex cases surrounding the 2008 banking collapse. But, this did not extend to anti-money laundering and counter terrorist financing, which has not received sufficient attention as a result.

Icelandic authorities have a fragmented understanding of AML/CFT risks, which is not used for further policy development.  Although supervisors are beginning to identify areas of risk relevant to their sectors, they need to further enhance their supervisory roles and their use of the risk-based approach. Iceland should also explore the specific risks associated with legal persons and arrangements and improve the availability of beneficial ownership information.

With the exception of the three large commercial banks in Iceland, the financial sector and non-financial businesses and professions have a poor understanding of the money laundering or terrorist financing risks to which they are exposed. These private sector entities have limited awareness of their AML/CFT obligations and report very few suspicious transactions in light of the risks present.

Icelandic authorities cooperate well with counterparts in other countries, particularly their Nordic neighbours, both seeking and providing information on a wide range of cases.

Iceland has a sound legal framework for investigation and prosecution of money laundering. Recently, there has been an upward trend in the number of money laundering prosecutions. Iceland is committed to trace and seize the proceeds of crime, both in Iceland and abroad. However, despite the presence of some relevant risk factors, Iceland has not conducted any criminal investigations into terrorist financing, although it has contributed intelligence to investigations initiated by foreign counterparts.

Iceland must use its ability to coordinate domestic authorities and put practices in place to strengthen its efforts to tackle money laundering and terrorist financing. During the assessment, the country demonstrated a commitment to take the necessary action to do so and the FATF welcomes the steps that country has already taken since that time.

The FATF adopted this report at its Plenary meeting in February 2018.