The Financial Action Task Force (FATF) was established in 1989 by the G7 to examine and develop measures to combat money laundering. It originally included the G7 countries, the European Commission and eight other countries. Click here to see the Economic Declaration from the G7 Summit in July 1989.

The FATF was given responsibility to examine money laundering techniques and trends, review the action already taken at a national or international level, and to set out measures needed to combat money laundering.  In 2001, the FATF expaned its mandate to also combat terrorist financing.

Since 2019, the FATF has had an open-ended mandate, after originally operating under fixed-terms.

FATF's mandate reflects the need for FATF to continue to lead decisive, co-ordinated and effective global action to counter the threats of the abuse of the financial system.
Read more 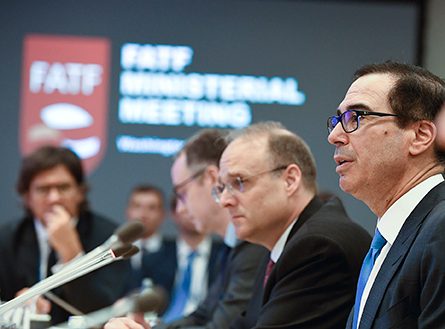 In April 1990, less than a year after its creation, the FATF issued a report containing a set of Forty Recommendations. These aimed to provide a comprehensive plan of action to fight money laundering.

The FATF Recommendations are the basis on which all countries should meet the shared objective of tackling money laundering, terrorist financing and the financing of proliferation. The FATF calls upon all countries to effectively implement these measures in their national systems.
Read more History of the FATF