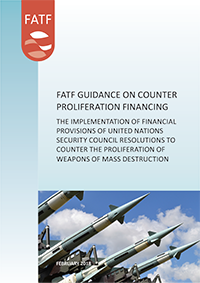 The proliferation of weapons of mass destruction not only affects the financial system but also all citizens. Helping to prevent UN-sanctioned entities from using the financial system to support their programmes to develop or obtain WMD should be a priority for every jurisdiction.

As a standard-setting body, the FATF develops specific requirements to give effect to and implement these UNSCRs, specifically on targeted financial sanctions to counter proliferation (Recommendation 7 and Recommendation 2). The FATF’s robust assessment process places the FATF in the unique position of being able to evaluate how effective a national countering proliferation financing regime is (Immediate Outcome 11).

Essentially, jurisdictions must ensure that proliferation-related assets are frozen, and have national mechanisms in place to do so effectively. However, understanding their obligations pursuant to the UNSCRs, and implementing effective measures to tackle the proliferation of weapons of mass destruction and terminate sanctions evasion can be challenging for certain jurisdictions. This non-binding guidance aims to help both public and private sector stakeholders understand and implement the obligations of the UNSCRs, as well as how to prevent sanctions from being evaded. It also aims to assist public sector stakeholders in building a more effective national coordination mechanism and supervisory regime to counter proliferation financing.

The UNSCRs have evolved significantly in recent years. The scope and nature of the sanctions regarding DPRK has expanded, given the country’s repeated violations of earlier UNSC resolutions. Some proliferation financing-related targeted financial sanctions against Iran have been terminated following the implementation of the Joint Comprehensive Plan of Action. This Guidance updates two earlier guidance Papers: The Implementation of Financial Provisions of United Nations Security Council Resolutions to Counter the Proliferation of Weapons of Mass Destruction (2013) and Best Practices Paper to Recommendation 2 Information Sharing and Exchange Related to the Financing of Proliferation Among Relevant Authorities at the Domestic Level (2012).