“Tackling money laundering linked to environmental crime is an often overlooked part of a much larger solution to helping save our climate,” said Dr. Pleyer in his opening remarks. “At the moment, far too often, criminals and their gangs are getting away with it. They make billions from looting our planet.”

For the first time, heads of international organisations including the UN’s Office on Drugs and Crime (UNODC), UN Environment Programme (UNEP), and the Convention on International Trade in Endangered Species of Wild Fauna and Flora (CITES) met with the FATF to discuss how to develop partnerships to tackle the dirty money that helps fuel environmental crimes. Fellow keynote speakers Espen Barth Eide, Norway’s Minister of Climate and Environment, and Dr. Dame Jane Goodall, primatologist and ethologist, also emphasised the need for coordinated action.

The Duke of Cambridge, Prince William, spoke to the conference and called on the public and private sectors to act on the findings of the FATF’s reports on environmental crime and the illegal wildlife trade.

“Countries need to make it a priority to follow the money from environmental crimes including the illegal wildlife trade,” said Prince William. “Now is the time for action. We need to draw on the collective expertise across the public, private and not-for-profit sectors to identify these criminal networks and bring them to justice.”

Transnational crime gangs involved in environmental crimes and wildlife trafficking often commit other serious crime such as drug trafficking, illicit arms smuggling and human trafficking. Under its German Presidency, the FATF has made it a priority to help countries follow the money linked to environmental crimes, to identify and disrupt the organised criminal networks involved.

Speakers pointed to the need to prioritise collection of data, anti-corruption efforts and effective implementation of the FATF Standards, including on transparency of company ownership, as key areas for action. While many countries are starting to see progress, such as increased financial intelligence, all speakers agreed that there is a need for continued global focus on money laundering linked to environmental crime. The FATF, UN agencies and other stakeholders must prioritise working closer together and sharing best practice to help the public and private sectors take effective action, speakers agreed.

“The FATF will continue to engage and work with its partners to help countries follow the money linked to environmental crime, including through the FATF’s mutual evaluation process (country assessments),” he added. The FATF will report back on the outcomes of this meeting to its members at the next FATF plenary in February 2022.

This report looks at the methods that criminals use to launder the proceeds of environmental crime. When properly implemented, the FATF Recommendations provide effective tools to go after these illicit financial flows.
Read more 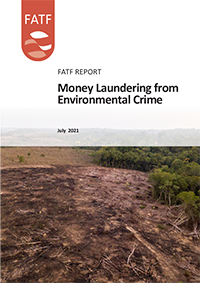 This study identifies the common methods being used by wildlife traffickers to launder their money, and highlights proposed actions that countries and the private sector can take to combat this trade.
Read more 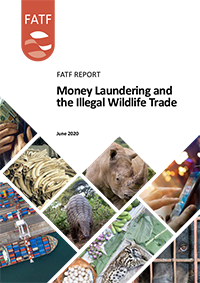