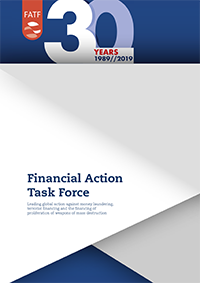 Three decades ago, the G7 leaders created the Financial Action Task Force, the FATF, to fight the organised financial flow from crime and the drugs trade. The G7 tasked the FATF with examing money laundering techniques and trends, reviewing action which had already been taken at a national or international level, and setting out the measures needed to combat money laundering. Since then, the FATF's mandate expanded to include action to fight terrorist financing and the financing of weapons of mass destruction.