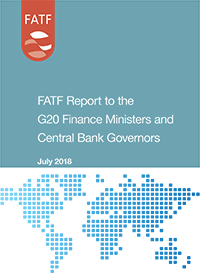 Paris, 24 July 2018 - G20 Finance Ministers and Central Bank Governors at their meeting in Buenos Aires on 21-22 July, recognised the real and growing money laundering and terrorist financing risks from crypto-assets and the urgency of action to address these risks; they reiterated their determination to fight money laundering and terrorist financing, and they called on the FATF to take further action to counter proliferation financing.

The FATF President, Marshall Billingslea, briefed Finance Ministers and Central Bank Governors on these risks and the work FATF will be doing under the US Presidency. The G20 asked the FATF to clarify in October 2018 how its standards apply to crypto assets.

The communique highlights G20 countries' individual and collective commitment to the full and effective implementation of the FATF Standards.

Under the Objectives for the FATF during the US Presidency (2018-2019) of the FATF, the FATF will prioritise work on combating the financing of the proliferation of weapons of mass destruction, further strengthening efforts to combat the financing of terrorism and taking action to promote a more consistent and effective regulation of virtual currencies and other crypto assets.

The FATF recognises the urgent need to clarify how the FATF standards apply to virtual currency providers and related businesses, including for customer due diligence, fund transfers, supervision, and enforcement.  The FATF will update the G20 on this in October 2018.