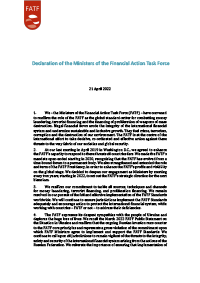 Washington, D.C., 21 April 2022 - The Ministers of the Financial Action Task Force (FATF) members committed to take swift and decisive action to improve the effectiveness of measures to fight money laundering, terrorist and proliferation financing at their meeting in Washington D.C. today. This includes promptly implementing the FATF’s global beneficial ownership rules, which were strengthened earlier this year, to stop criminals from hiding their illicit activities and dirty money behind anonymous shell companies and other corporate structures.

During this biennial Ministerial meeting, members pledged to remedy remaining significant technical compliance deficiencies and agreed on strategic priorities for the two years ahead (2022-2024) to enhance the effective implementation of the FATF Standards worldwide.

In addition to enhancing beneficial ownership transparency, these include increasing capabilities to more effectively recover criminal assets, which will help remove incentives for crimes, such as corruption and tax crimes, and return assets to victims.

FATF President Dr. Marcus Pleyer reported on the successful completion of the FATF’s Strategic Review, which ministers welcomed and expect to achieve more timely assessments with a stronger focus on risk in the next round of mutual evaluations.

FATF Ministers expressed their sympathies with the people of Ukraine in light of the ongoing Russian invasion of Ukraine, and called on jurisdictions to remain vigilant of the threats to the integrity, safety and security of the international financial system that result from Russia’s actions.

FATF Ministers will meet again in 2024.

The future of the Global Network - Strategic Vision