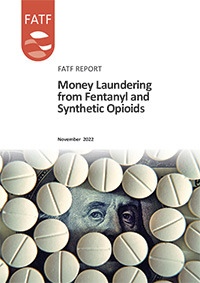 Organised crime groups are fuelling a synthetic opioid crisis that has contributed to hundreds of thousands of drug overdose deaths in the past decade.

In North America, the non-medical use of fentanyl is the main driver behind a record number of overdoses and opioid-related deaths. In parts of Africa, a tramadol epidemic is having a significant impact on public health. While across Asia, many countries report a growing number of cases.

This report looks at the way proceeds are laundered from synthetic opioids trafficking. Organised crime groups use a range of methods including bulk cash smuggling, cash couriers, trade-based money laundering and virtual assets (crypto), as well as shell companies and the services of professional money launderers.

Even though a majority of countries identify drug trafficking as a major predicate offence for money laundering, the number of investigations and prosecutions concerning the laundering of proceeds from synthetic opioids trafficking remains low. This report aims to raise awareness about the opioid trade, including the use of precursor chemicals, and the related global financial flows.  It also makes recommendations on the best approaches to detect and disrupt the criminal networks involved. These include: