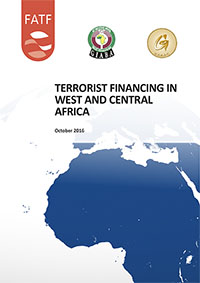 West and Central Africa continues to experience the terrible impact of terrorism. Boko Haram in particular, has developed into the most deadly terrorist organisations in the world, responsible for 6000 casualties in 2015 alone. Terrorism not only threatens civilians’ lives in this region, but also contributes to political instability and undermines economic gain and future development.

In today’s globalised world, and as ISIL has demonstrated, a regional terrorist threat, can quickly become a global one. The international community must work together with West and Central Africa to deprive terrorist organisations of their funds, and take away their ability to finance terrorist attacks.

This joint FATF- GIABA-GABAC report updates the 2013 report on Terrorist Financing in West Africa and extends it to Central Africa. The report looks at the confirmed and suspected funding source of terrorist groups that are operating in this region. It identifies the terrorist financing risks that are unique to the region, such as cattle rustling. Cash, including foreign currency, also plays an important role in terrorist financing in the West and Central African region. The report identifies challenges that the region faces to regulate financial products and sectors, and emphasizes the need for better cross-border collaboration.