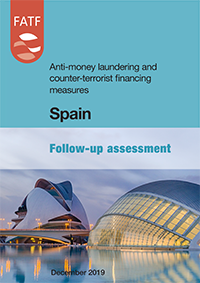 4 December 2019 – Since its mutual evaluation in 2014, Spain has worked to improve the effectiveness of its national framework to combat money laundering and terrorist financing.

Spain is now achieving a substantial level of effectiveness in ensuring that financial institutions and lawyers, real estate agents and other non-financial businesses and professions apply preventive measures to address the money laundering and terrorist financing risks they face, and report suspicious transactions. FATF re-rated Spain from Moderate to Substantial.

Spain took action to address all of the priority and recommendation actions identified in the 2014 mutual evaluation. This resulted in better supervision of lawyers, real estate agents and other non-financial businesses and professions. Spanish authorities also raised awareness with the financial sector, in particular money value transfer services, and non-financial businesses and professions about the money laundering and terrorist financing risks they could face and the measures they can implement to mitigate these risks. Spain also improved its management of foreign trust and anti-tipping off measures.

Spain is now achieving a substantial level of effectiveness in preventing persons and entities involved in the proliferation of weapons of mass destruction from raising, moving and using funds, consistent with the relevant United Nations Security Council Resolutions. The FATF re-rated Spain from Moderate to Substantial.

Spain has established several coordination mechanisms to prevent the financing of weapons of mass destruction. Spain has demonstrated that whether it is through law enforcement investigations or supervision of reporting entities, they are able to identify and disrupt those looking to evade proliferation-financing sanctions.

Spain is now achieving high or substantial levels of effectiveness on 10 of the 11 key areas identified by the FATF as Immediate Outcomes of an effective framework to combat money laundering and terrorist financing.

Spain must now focus on strengthening the effectiveness of its measure to prevent terrorists and terrorist organisations from raising, moving and using funds and from abusing the non-profit sector.

During the five years that have passed since the mutual evaluation, Spain has worked to improve its technical compliance with the FATF’s requirements. To reflect this progress, the FATF re-rated Spain on three Recommendations in 2018 and the country is now compliant or largely compliant on 38 of the 40 Recommendations. The follow-up report is available here.