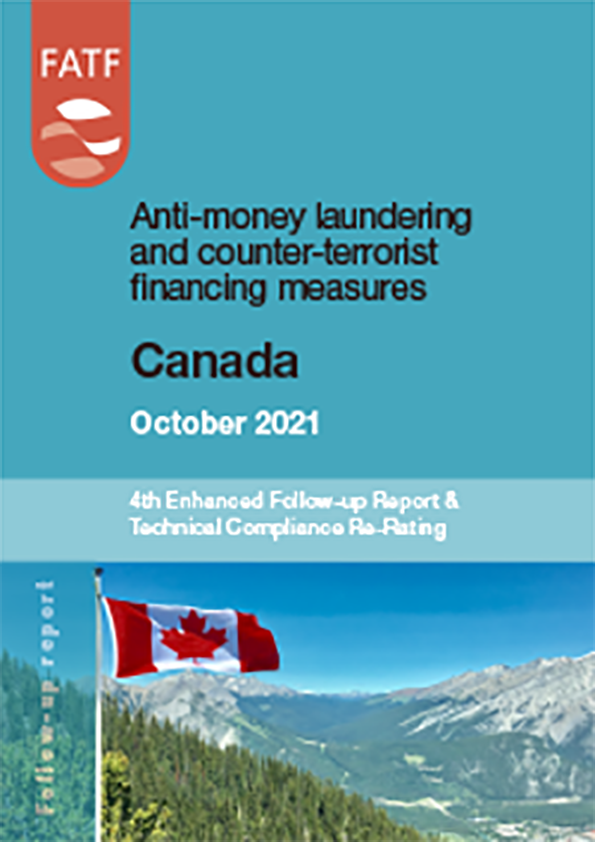 1 October 2021 - Since the 2016 assessment of Canada’s measures to tackle money laundering and terrorist financing, the country has taken a number of Follow-up Report Canada - 2021

Canada has been in an enhanced follow-up process following the adoption of its Canada's measures to combat money laundering and terrorist financing. In line with the FATF Procedures for mutual evaluations, the country has reported back to the FATF on the action it has taken since its mutual evaluation. Consequently, to reflect Canada’s progress, the FATF has now re-rated the country on the following Recommendations:

17 – Reliance on third parties, from non compliant to compliant

20 – Reporting of suspicious transactions, from partially compliant to largely compliant

23 – DNFPBs: Other Measures, from non-compliant to largely compliant

The report also looks at whether Canada’s measures meet the requirements of FATF Recommendations 2, 5, 7, 8, 15, 18 and 21, which changed since their 2016 mutual evaluation. The FATF agreed to downgrade Canada on rating 8 (Non-profit organisations) from compliant to partially compliant, and upgrade the rating for Recommendation 15 (New technologies) from non compliant to largely compliant.

The FATF has agreed to move Canada from enhanced follow-up to regular follow-up. Canada will continue to report back to FATF on its progress.