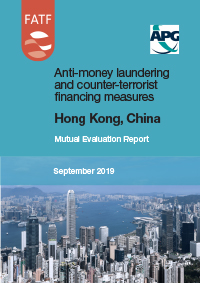 Paris, 4 September 2019  - Hong Kong, China has a sound regime to fight money laundering and terrorist financing that is delivering good results. However, it must enhance prosecution of money laundering involving crimes committed abroad and strengthen supervision of certain non-financial businesses.

Hong Kong, China is a major financial centre.  While Hong Kong, China has a low domestic crime rate, it faces a significant risk of attracting those who seek to launder the proceeds of crimes such as corruption and tax evasion.

Authorities in Hong Kong, China generally have a good understanding of the money laundering and terrorist financing risks they are exposed to, as do the larger financial sector entities.  However, some smaller institutions, non-financial businesses and their supervisors do not always understand these risks, or how to mitigate them.

Hong Kong, China actively prosecutes money laundering from domestic offences. It also prioritises the confiscation of proceeds of crime through strong action by law enforcement agencies and prosecutors. Authorities respond effectively to the large number of requests for cooperation from foreign counterparts. However, given the jurisdiction’s position as an international financial centre, and the risks it faces from crimes committed abroad, it is not making sufficient outgoing requests for cooperation.  Authorities could focus more on prosecuting the laundering of proceeds from foreign offences.

Hong Kong, China faces a medium-low risk of terrorist financing. Nevertheless, it has implemented sound systems to detect and investigate terrorist financing when it occurs.  Due to contextual factors such as its geographic location and its role as an international financial centre, Hong Kong China could attract transactions necessary for the proliferation of weapons of mass destruction. Authorities demonstrated a robust use of financial intelligence and the capacity to conduct complex investigations in this context, although these have not yet exposed proliferation financing cases.

Hong Kong, China’s recent legislative amendments have significantly strengthened its response to fight money laundering and terrorist financing, but these measures have not been operational for long enough to fully demonstrate their effectiveness.

The FATF adopted this report at its June 2019 Plenary meeting.