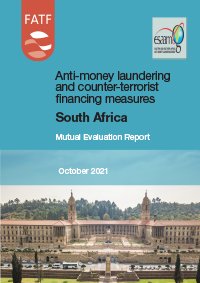 Paris, 7 October 2021 - South Africa has a solid legal framework to fight money laundering and terrorist financing but has significant shortcomings implementing an effective system, including a failure to pursue serious cases.

The International Monetary Fund staff-led assessment comprehensively reviews the effectiveness of South Africa’s measures to combat money laundering and terrorist financing, and their level of compliance with the FATF Recommendations as at the time of the on-site visit in November 2019. The FATF adopted this report at its June 2021 Plenary meeting. This was a joint assessment with the Eastern and Southern Africa Anti-money Laundering Group (ESAAMLG) which also adopted the report in September 2021.

South Africa is a G20 economy and a regional financial hub for sub-Saharan Africa. Its banks offer a diverse suite of products and are the main entry point to the financial system. South Africa is exposed to the laundering of domestic crime proceeds and foreign crime proceeds from the region. It is also exposed to terrorism financing risks associated with foreign terrorism, foreign terrorist fighters (FTFs), and potential domestic terrorism.

South Africa needs to pursue money laundering and terrorist financing in line with its risk profile, including so-called “State Capture”, the corruption practices involving businesses and politicians conspiring to influence South Africa’s decision-making process to advance their own interests. It helped generate substantial corruption proceeds and undermined key agencies with roles to combat such activity. Recent initiatives have started to address the situation, including replacing key staff and increasing resources at law enforcement and judicial agencies.

The country’s Financial Intelligence Centre effectively produces operational financial intelligence. Law enforcement agencies use this for criminal investigations and to trace assets but lack the skills and resources to proactively investigate money laundering or terrorist financing.

While authorities carry out some successful money laundering investigations, the proactive identification and investigation of laundering networks and professional enablers is not really occurring.

South African authorities have achieved some good results confiscating criminal proceeds. However, they have struggled to recover assets from ‘State Capture’ and proceeds that moved to other countries.

The widespread use of cash is a high risk for money laundering and terrorist financing, including across borders. Detecting and recovering cash proceeds of crime remains challenging while efforts to prevent false or undeclared cross-border currency movements needs major improvement.

South Africa must also make better use of financial intelligence. It needs to proactively work with international partners to detect and seize illicit cash flows. It must improve the availability of beneficial ownership information, improve the application of risk-based approach by businesses and supervisors and close gaps in sectoral coverage.

The FATF adopted this report at its June 2021 Plenary meeting.