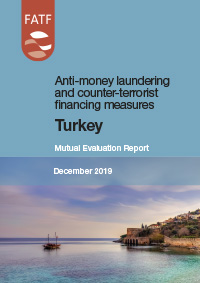 Paris, 16 December 2019 - Turkey has understood the risks it faces from money laundering and terrorist financing but serious shortcomings remain, including the need to improve measures for freezing assets linked to terrorism and proliferation of weapons of mass destruction.

In recent years, Turkey has significantly strengthened relevant laws and regulations. They form the foundation for positive action to address these risks and detect and prevent criminals and terrorist from misusing the financial system. However, it needs to swiftly improve implementation in a number of areas to boost effectiveness.

Authorities cooperate and coordinate well but they need to make better use of financial intelligence to improve and increase the number of money laundering investigations which currently result in few convictions only. The country must also develop a national strategy to permanently deprive criminals of the proceeds of their crimes.

When investigating terrorist financing cases, Turkey’s authorities focus largely on identifying the assets held by terror suspects, rather than expanding the scope to include the collection, movement, and use of funds or other assets. Turkey also needs to fundamentally improve its ability to freeze, without delay, assets linked to terrorism, financing of terrorism and proliferation of weapons of mass destruction.

Turkey’s authorities demonstrated a substantial level of effectiveness in their co-operation with foreign counterparts on a variety of requests and sharing information both spontaneously and on requests.

The Turkish banking sector has a good understanding of its potential exposure to transactions with links to crime, but less understanding of their exposure to terrorist financing. Non-financial entities, such as real estate agents, dealers in precious metal and stones have a less comprehensive and sometimes limited understanding of the risks they face. Supervision of the financial and other relevant sectors is generally well-developed but sanctions for non-compliance are not always effective, proportionate and dissuasive.

Turkey has understood the risks it faces from money laundering and terrorist financing and has established a legal framework that can form the basis for achieving effective outcomes, but it needs to swiftly address the gaps identified in this report.

The FATF adopted this report at its October 2019 Plenary meeting.