Mutual Evaluation of the State of Kuwait 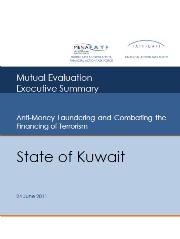 Mutual Evaluation of the State of Kuwait

This report presents a summary of the evaluation of the anti-money laundering (AML) and combating the financing of terrorism (CFT) measures in place in the State of Kuwait at the time of the on-site visit by the assessment team (17 October – 1 November 2010).

The anti-money laundering law (the AML Law), containing the core elements of the AML regime, was introduced in 2002. It imposes customer due diligence (CDD) obligations on a range of financial institutions, and requires these financial institutions to submit suspicious transaction reports (STRs) to the Public Prosecutor’s Office. However, the AML Law did not criminalize the financing of terrorism and did not put in place a mechanism to implement the United Nations Security Council Resolutions (UNSCRs). Kuwait has initiated a relatively small number of prosecutions for money laundering and of orders to confiscate assets. The AML Law was never amended; however, a new draft law was sent before the National Assembly in 2007.

Several indicators suggest that money laundering and terrorist financing operations do not pose a serious threat to the Kuwaiti economy. Although there is currently no evidence of significant money laundering in the country, Kuwait’s financial sector is growing rapidly in terms of banking sector assets. This development has the potential of creating a suitable environment for money launderers and terrorist financers to exploit. No major terrorist activity has been recorded in the country. Less serious terrorist activity has been noted.

The AML/CFT framework has many shortcomings. The main deficiencies of the regime are listed below.

Statistics are not collected and guidance and feedback are not adequately provided to financial institutions and DNFBPs.