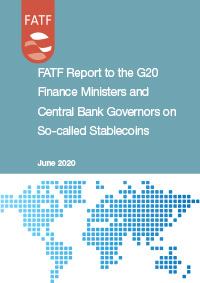 In the same way as any other large-scale value transfer system, this propensity for mass-adoption makes them attractive to criminals and terrorists to launder their proceeds of crime and finance their terrorist activities.

This report was completed simultaneously with a 12-month review of the implementation of revisions to the FATF Standards. In June 2019, the FATF strengthened its Standards to clarify the application of anti-money laundering and counter- terrorist financing requirements on virtual assets and virtual asset service providers. The FATF’s 12-month review of these revisions complement the findings of this report. In particular, the FATF calls on all jurisdictions to implement the revised FATF Standards as a matter of priority. The first step to ensuring an effective global response to so-called stablecoins, and virtual assets more broadly, is ensuring that the FATF’s pre-existing Standards are transposed into domestic law and operationalized.