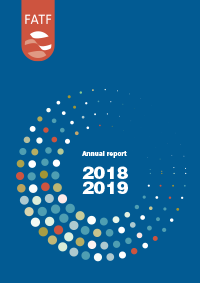 Under the Presidency of Mr. Marshall Billingslea of the United States, the FATF achieved a number of important outcomes, which are set out in the FATF Annual Report 2018-2019.  Among these outcomes are:

New Mandate and 30th anniversary - During this Plenary year, as the FATF celebrated it's 30th anniversary, its Ministers agreed an FATF Ministers give FATF an open-ended Mandate for the FATF and its role leading global action to counter money laundering, terrorist financing and the financing of proliferation of weapons of mass destruction.

Virtual assets - With support from the G20, the FATF set new global standards to prevent the misuse of virtual assets for crime and terror, and developed guidance to help countries implement these new requirements.

Proliferation financing - The FATF started work to strengthen the international standards to counter the financing of proliferation of weapons of mass
destruction.

Mutual Evaluation Process - The FATF published six mutual evaluation reports and the follow-up reports of eight of its members.

Membership - The FATF welcomed Israel and the Kingdom of Saudi Arabia as members.

Outcomes under the United States Presidency: